Oliver Kuusik (1980) has received his Master’s degree and Opera Studio diploma from the Guildhall School of Music & Drama (Maestro Rudolf Piernay) and started his remarkable career at the Estonian National Opera with roles as Don Ramiro (Rossini’s La Cenerentola), Ferrando (Mozart’s Così fan tutte) ect. His operatic roles in Estonia as well as abroad have been highly recognized. His range covers everything from the classical masters to the most contemporary operas.

Oliver is highly sought after as an oratorio soloist and performer of chamber music and is no stranger even to the musical theatre. He is the winner of awards at a number of contests and the recipient of government prizes. Oliver Kuusik has successfully performed in many European countries, the US and Canada. 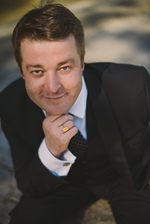